Evidence-based surveillance and management strategy to reduce the incidence and limit the spread of potato cyst nematodes is being developed and implemented in Kenya. Stakeholders from public, private and research for development sectors are collaborating to strengthen national capacity to cope with this new invasive threat. 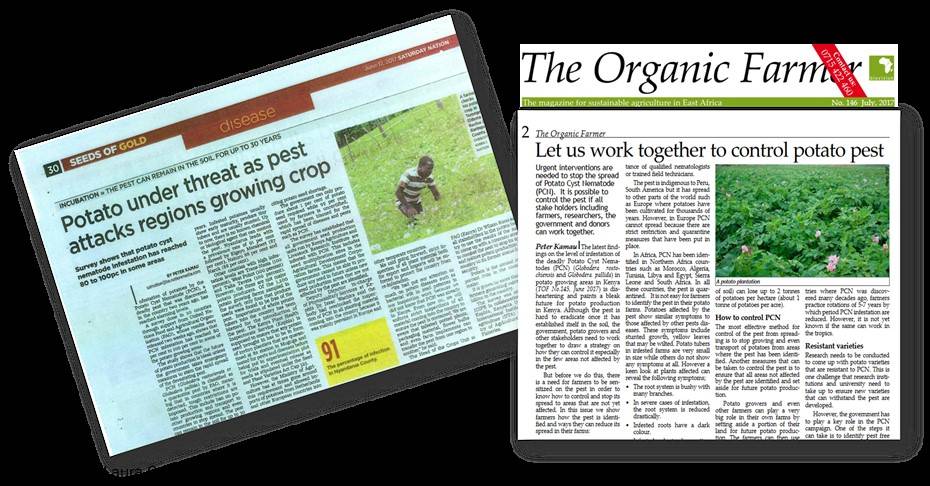 In 2015, potato cyst nematodes (PCN) were confirmed in sub-Saharan Africa for the first time, in Kenya. These pests, that originate from the Andes (South America) have been introduced into many potato growing regions across the globe even though they are classified as quarantine pests globally.

PCN can have a devastating impact on potatoes. These pests infect the roots, causing stunted crop growth and reducing tuber yields up to 80%, or total crop failure even under severe infection levels. They are extremely difficult to control due to their ease of spread and their ability to remain dormant in the soil in the absence of host potato plants, protected within cysts that can survive up to 20 years.

In 2016 KEPHIS, KALRO, Kenyatta University and University of Nairobi, together with icipe, IITA and FAO realized a national survey of PCN in Kenya, sampling 1,250 farms from all key potato growing counties including 22 certified potato seed farms. Analysis revealed a stunning level of pest prevalence of 82%, with some very high levels of infestation recorded. Shockingly, 82% of seed farms were also infested with PCNThe presence of Globodera pallida, a species until then not reported in Kenya, was also confirmed during this survey.

With the results of this survey, KEPHIS together with its R4D partners have concluded that immediate actions are necessary to mitigate and manage the spread of these highly damaging pests, in both Kenya and the region as a whole.

A scientific and technical task force was created and included the Ministry of Agriculture, KEPHIS, KALRO, Kenyatta University, CIP, icipe and IITA. Through the task force, the capacity of national extension officers and the phytosanitary services to accurately diagnose and deal with PCN were strengthened (21 staff nominated by KEPHIS, KALRO and Kenyan Universities).

Stakeholders within the certified potato seed industry were also sensitized to the serious threat that PCN represents for potato production and for their business. New guidelines for the assessment of certified seed production were distributed by KEPHIS, which specifically included the need to test for the detection of PCN. Leaflets, other communication materials and newspaper articles contributed significantly to raising awareness among potato growers and the public. Increased awareness was clearly reflected in the potato variety catalogue distributed in 2017 by the National Potato Council of Kenya, where information about the tolerance/resistance to PCN of 19 potato varieties was included.

A national surveys on potato cyst nematodes was realized in 2016 in collaboration with KEPHIS, KALRO, Kenyatta University, University of Nairobi, icipe, IITA and FAO.

A scientific and technical task force was created and included the Ministry of Agriculture, KEPHIS, KALRO, Kenyatta University, CIP, icipe and IITA. Through the task force, the capacity of national extension officers and the phytosanitary services to accurately diagnose and deal with PCN were strengthened (21 staff nominated by KEPHIS, KALRO and Kenyan Universities).

Based on the results of the survey, in 2017 KEPHIS also issued new technical guidelines making soil sampling for PCN mandatory to all potato seed producers. Guidelines were implemented in 2017 and 2018.

This work was undertaken as part of the CGIAR Research Program on Roots, Tubers and Bananas (RTB).

Food and Agriculture Organization of the United Nations - FAO

Jorno-Kenyatta University of Agriculture and Technology

Laura Cortada holds a BSc in Biology (Autonomous University of Barcelona-UAB), a BSc in Agronomy in Crop and Livestock Management (Technical University of Catalonia- UPC), and a MSc in Biotechnology and Sustainability (UPC). From 2005 to 2010 she pursued her PhD studies at the Plant Pathology Department of the Institute for Research and Technology, Food and Agriculture (IRTA) (Spain), where her main research focus was on the biological control of plant parasitic nematodes (PPN) for sustainable intensification in horticultural and citrus crops, combining the use of rootstocks, resistant-germplasm, and bioprotectants (plant & fungi extracts). She has worked providing advisory services to small-scale farmers, through public and private organizations, in Europe and in East Africa. Since June 2012, she worked as a Research and Learning officer and later as the Head of the Innovation and Learning Unit for the Somalia Program of the Food and Agriculture Organization of the UN (FAO).