The All India Coordinated Research Project on Pearl Millet (AICRP-PM) of Indian Council of Agricultural Research (ICAR) has established minimum levels of iron and zinc to be bred into national varieties of pearl millet. The policy favours biofortified pearl millet in India and thus contributes to alleviate burden of malnutrition. Biofortification is a simple, sustainable and nutrition sensitive agricultural innovation and favorable policies for biofortified crops is a game changer to drive nutrition security. 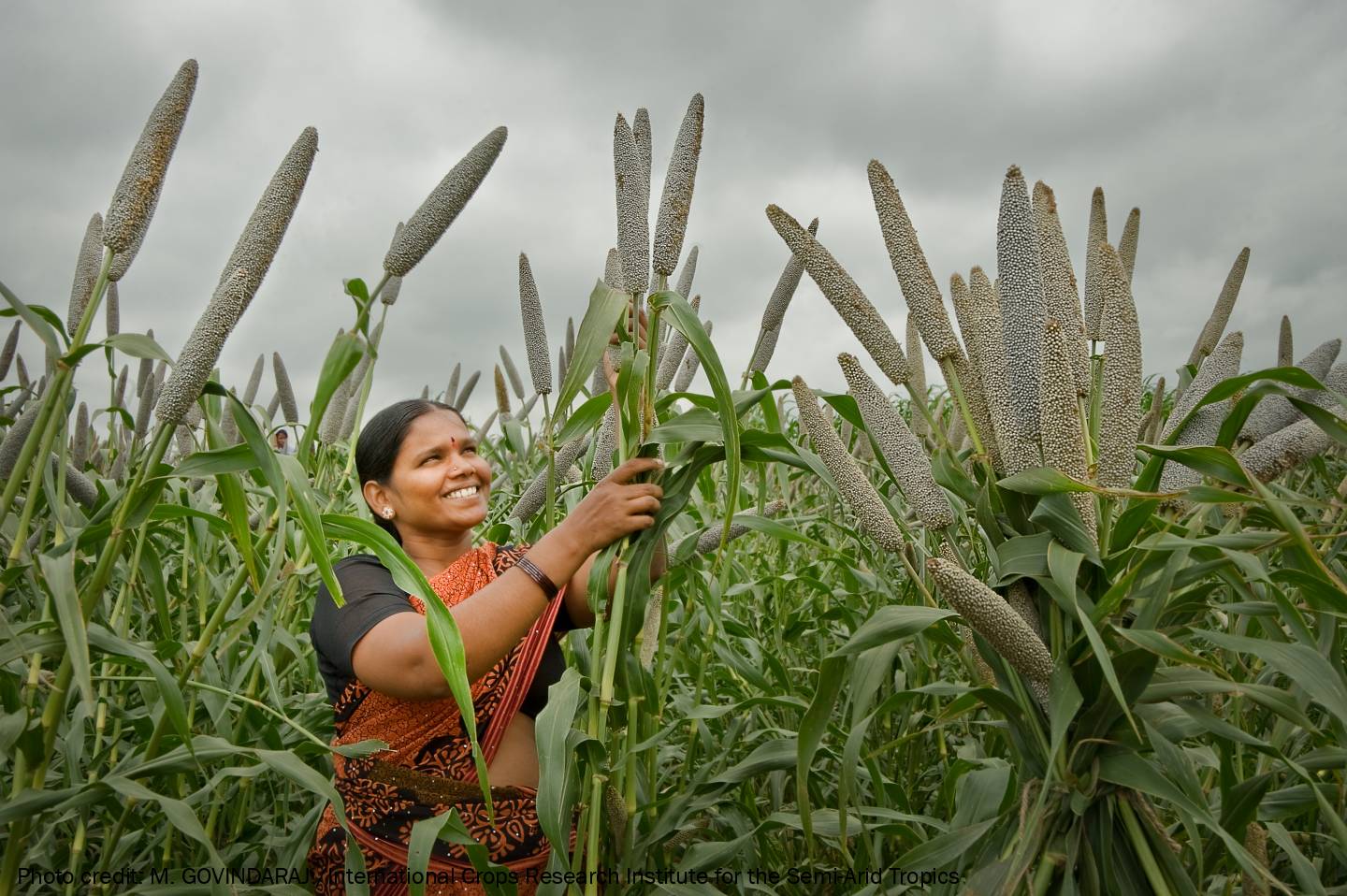 All India Coordinated Research Projects of the Indian Council of Agriultural Research (AICRP-PM of ICAR) has established minimum standards on iron and zinc in pearl millet for national cultivar release policy. At the 52nd Annual Meeting of the AICRP in 2017, it was agreed that all pearl millet varieties would be bred to contain a minimum 42 ppm of iron and 32 ppm of zinc. This policy applies to any variety/hybrids to be notified either from public/private in India. Based on the policy guidelines test hybrids as well as pipeline hybrids are advanced and subsequently released, four hybrids (HHB 299, AHB1200, DHBH1211, AHB 1269) were released in 2018 and 2019. The decision on nutritional standards in India is important as pearl millet is a staple for many poor people in northern India, and ICRISAT’s key contributions include, establishing baselines of Fe and Zn for Indian cultivars released over 40 years and documenting them. To arrive to this stage of national level policy guidelines it took four years, and HarvestPlus extended financial assistance to ICRISAT and ICAR-partners through ICRISAT. HarvestPlus continues to support ICRISAT for micronutrients quality analysis that is extended to ICAR-partners. In India, 94,000 households benefited from cultivation of new biofortified pearl millet cultivar. Micronutirent malnutrition, particular Fe deficiency is rampant among women and children in India and world and need interventions to combat Fe and Zn deficiencies. In India alone, about 80% of the pregnant women, 52% of non-pregnant women, and 74% of children in the 6-35 months age group suffer from iron deficiency.  About 52% of children below 5 year are zinc deficient.

Current policy is favoring testing and release of pearl millet cultivars that meet minimum grain Fe (42 ppm) and Zn (32 ppm) standards in addition to higher yield and disease resistance.  A cultivar that fails to meet the minimum standards will not be tested and promoted in national testing system nor released for cultivation. This is a welcome policy that favours biofortification mainstreaming as a key innovation to drive nutrition sensitive agriculture. 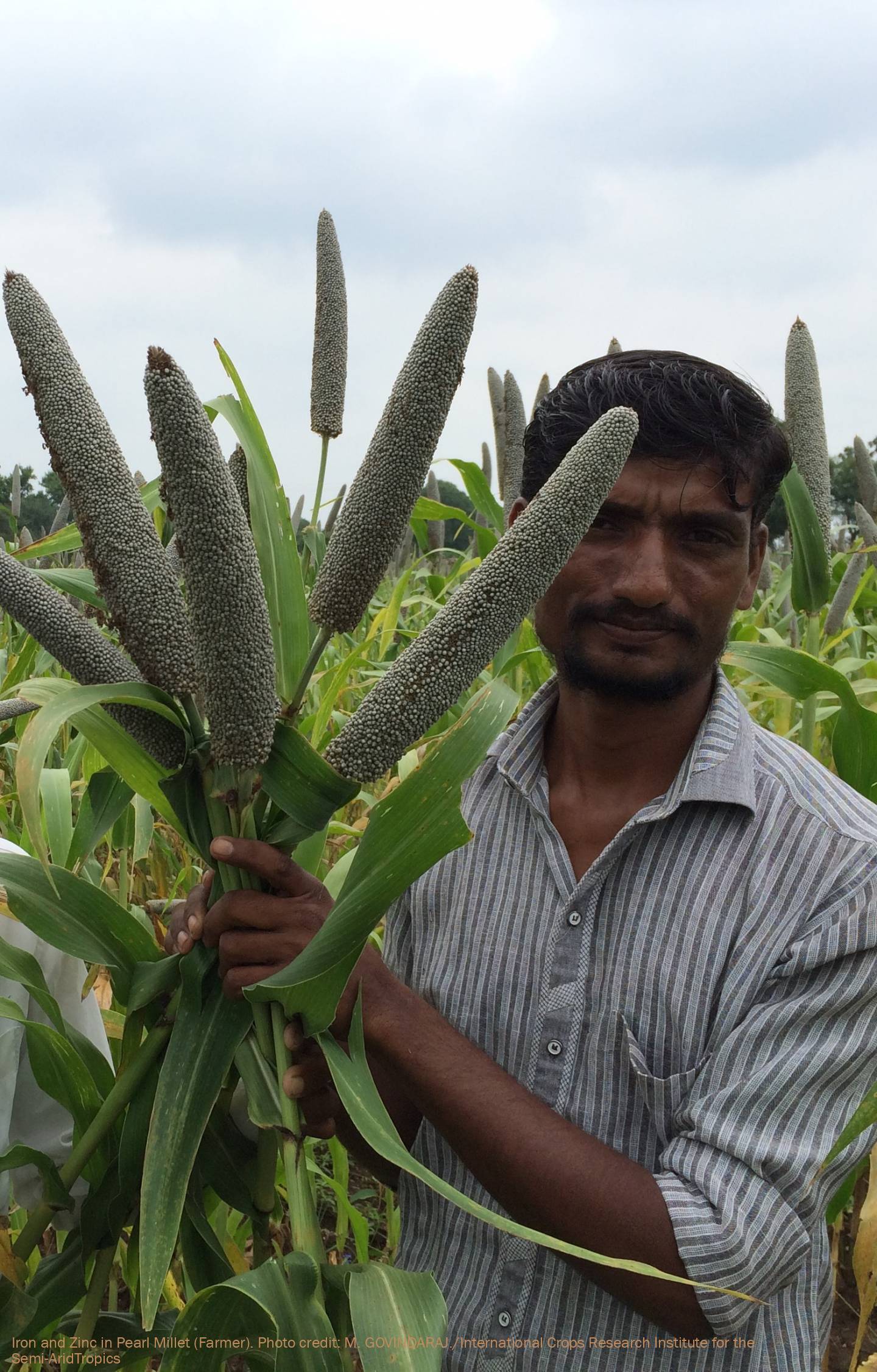 CRP on Agriculture for Nutrition and Health - A4NH

Janila Pasupuleti is Principal Groundnut Breeder at ICRISAT, based in Hyderabad, India, and Leader of the Flagship Program on Variety and Hybrid Development program of the CGIAR Research Program on Grain Legumes & Dryland Cereals (http://gldc.cgiar.org). Janila has a PhD from the Indian Agricultural Research Institute (IARI), New Delhi and has 17 years of experience at the University of Hyderabad (UoH), Acharya NG Ranga Agricultural University (ANGRAU), Center of DNA Fingerprinting and Diagnostics (CDFD) and ICRISAT (since 2011).

In the last three years, 1660 advanced breeding lines of groundnut (peanut) developed in her program were shared with partners for evaluation in over 10 countries. She is passionate about furthering ‘Crop Network Groups’ represented by multi-disciplinary teams as a platform for crop breeding product design, strategy, development, testing, advancement, and delivery in Asia and Africa.

Working with national partners, her team has developed high oleic groundnut varieties for the first time in India to meet food industry demand, and shared the same with partners in nine countries in Asia and Africa. Her team in collaboration ICAR’s Directorate of Groundnut Research (DGR) and NARS in India, released high oil variety ICGV 03043 and a drought-tolerant variety ICGV 07220 during 2017.She has mentored over 10 research scholars and post-docs, and imparted training to over 20 researchers from Asia and Africa.