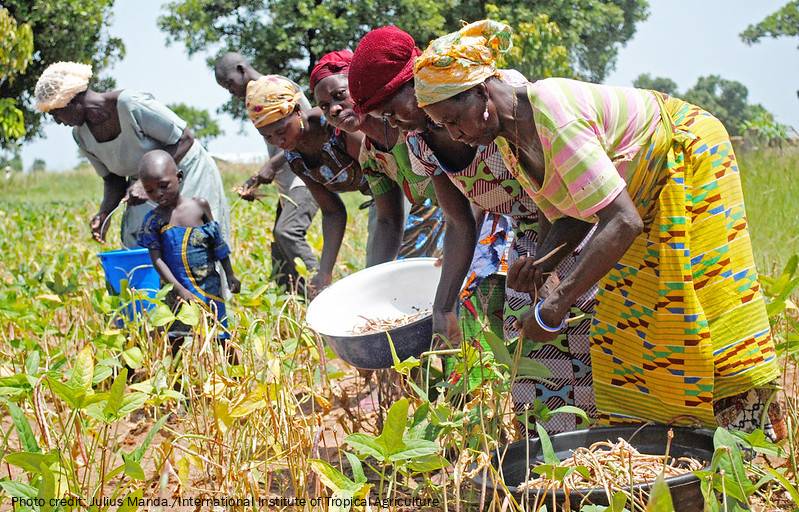 Cowpea is an important food and fodder legume and essential component of cropping systems in the dry savannas of West Africa where farmers traditionally cultivate two main types of cowpea: early-maturing varieties grown for grain and late maturing varieties that are grown for fodder production. In view of its early maturity and ability to fit as a niche crop in multiple cropping systems involving maize, sorghum, and millet, cowpea has quickly become one of the most important food as well as cash crops in Africa. Cowpea covers the largest area of any grain legume in Africa and is especially important in West Africa where Nigeria and Niger alone account for over 75% of the total cowpea production in the world. Cowpea production in Nigeria is however constrained by several factors which include low yield potential, biotic stresses (insect pests, diseases, striga and alectra infestations), abiotic stresses (drought, heat and low soil fertility), and poor access to seeds of improved varieties. The International Institute of Tropical Agriculture (IITA) and its partners such as the Institute for Agricultural Research (IAR) of Nigeria have developed and promoted improved cowpea varieties that are high yielding, resistant to striga, alectra, and insect pests, and are also drought tolerant. Since 2007, two projects —Tropical Legumes II and III — have also supported the development and release of several varieties that have the beneficial traits mentioned above. Taken together, these efforts have resulted in the release over 20 improved cowpea varieties in Nigeria since the early 1980’s. Through the Tropical Legumes projects, significant strides have also been made to improve the cowpea seed systems. An estimated 491 tons of foundation seed and 5,308 tons of certified seed have been produced over the period 2008-2016, which was enough to cover about 265,415 hectares. These activities have led to increased adoption of cowpea varieties, leading to increased cowpea yields and income and reduced poverty among the adopters of improved cowpea varieties.

The study was conducted by the International Institute of Tropical agriculture (IITA) in collaboration with the Institute for Agricultural Research (IAR) of Nigeria. It was funded by the Bill and Melinda Gates Foundation through the Tropical Legumes projects.

Jake Carampatana has undergraduate training in Agronomy with focus on crop production and farming systems management; and a MSc in Agricultural Science and Resource Management in the Tropics and Subtropics from the University of Bonn. Having served as researcher at the Philippine Rice Research Institute, he has experience in collaborative hybrid rice development including pedigree nursery handling, F1 and parent line seed production and quality management, field performance tests, and communication and general project management. As Research Fellow, he supports the CRP-GLDC PMU and MEL Platform Teams around administrative and coordination processes, communication, and user-based testing and support to MEL platform development team.