Farmers and extensionists find it hard to correctly identify cassava diseases. Based upon research with RTB using artificial intelligence and Google’s TensorFlow technology the mobile app Nuru has been developed. This has been downloaded over 1,000 times and is being used by farmers in Kenya and elsewhere to improve the management of these diseases. 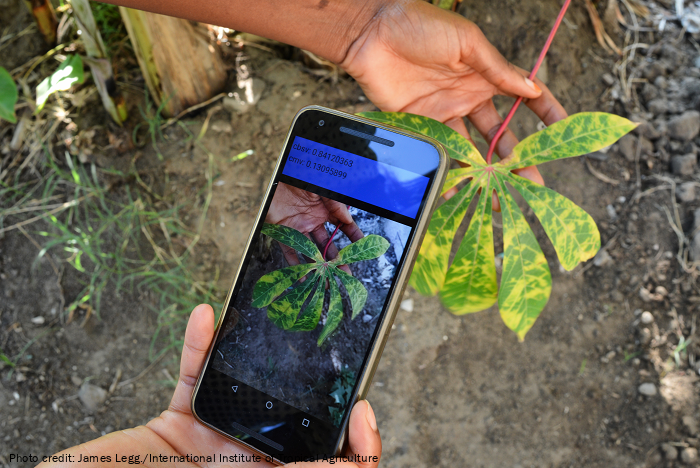 Mobile apps, can help extensionists and farmers to produce food more efficiently, and to be more resilient in the face of risks. A team from Penn State University, IITA and RTB have created an app called Nuru (Swahili for “light”). Nuru uses artificial intelligence and Google software to recognize symptoms of leaf damage caused by diseases and pests (1). Nuru can recognize cassava brown streak disease (CBSD), cassava mosaic disease (CMD) and cassava green mite damage (CGM), as well as a healthy leaf.

To use Nuru, you start up the app in your android phone, point the phone’s camera at a cassava leaf in the field, and Nuru will identify the condition in seconds. It’s like having a plant doctor in your pocket. “You wave your phone over a specific leaf, and if it has a symptom, a box will pop up saying ‘you have this problem.’ When you get a diagnosis, you learn about the best management practices,” explains Dr. Amanda Ramcharan, of the Penn State team.

Nuru has been downloaded from the Play Store more than 1,000 times and users have generated in excess of 16,000 reports from 60 countries—adding to the app’s database of images (2).

Self Help Africa, an NGO, is testing Nuru with 28,000 farmers in seven counties of Kenya. One of these farmers, Josephine Arisat, has grown cassava since 1995 increasingly for sale. However, disease was a major limitation. After using Nuru for a year and a half, Josephine has been able to identify and manage cassava diseases and get bigger yields (3, 4).

Nuru is still undergoing improvement, and its accuracy is much higher with severe symptoms than with mild ones. This is important, because farmers can manage disease better if they diagnose it early, using mild symptoms. Improved accuracy is a challenge, especially since viral disease symptoms often look alike initially, but Nuru is improving quickly. Nuru has potential to be applied to a wide range of disease and pest problems that affect smallholder farmers. A new scaling phase of the work will see its application extended to other RTB crops such as potato and sweet potato, adding to existing capacity to identify fall armyworm damage in maize. Nuru surely does offer farmers the prospect of ‘light at the end of the tunnel’ in their on-going struggle to overcome pests and diseases and thereby maximize their farm productivity.

Cassava provides food for more than 500 million African people every day. Several diseases affect the plant, causing farmers to lose their harvest. Farmers and even extensionists struggled to correctly identify the diseases. Penn State University and the International Institute of Tropical Agriculture, working through RTB and with Big Data have created an innovative solution that uses the power of artificial intelligence through Google’s open source TensorFlow technology. The app, Nuru, can access over 5,000 images of cassava plants affected by disease to make predictions about the health of a farmer’s crop in less than one second. It can identify cassava mosaic disease, brown streak and cassava mites. It acts like a doctor diagnosing symptoms, but specifically for plants. An extensionist or farmer can wave their phone over a specific leaf, and if it has a symptom a box will pop with the diagnosis. Upon receiving this message, farmers can simply push a button to request advice on how to respond to any diseases that are present.

The app is available for android mobile phones through the PlayStore (1). More than 1,000 downloads of the app have been made. Hence users have generated more than 16,000 reports using Nuru, from 60 countries. On average there are about 4 images per report. This means that the database probably holds more than 60,000 images. All reports are georeferenced and automatically populate maps. Feedback from users on the PlayStore site is generally very positive. Nuru has been featured by Google (2).

The system has been tested with farmers in Busia County, Kenya in partnership with Self Help Africa, a charity helping 28,000 farmers in the cassava value chain (3). Josephine Arisat a farmer from Asing’e location in Busia County reports that Nuru allowed her to identify cassava diseases and access recommendations about clean seed of new varieties to plant (4).

This research was undertaken as part of the CGIAR Research Program on Roots, Tubers and Bananas (RTB) and the Platform for Big Data in Agriculture.

James Legg is a plant virologist at IITA, with more than 20 years experience of working on plant viruses and their insect vectors.

James graduated in Pure and Applied Biology from St. Catherine’s College, University of Oxford, before completing M.Sc. and Ph.D. studies at the University of Reading. James’ Ph.D. research examined the role of the whitefly, Bemisia tabaci in vectoring cassava mosaic geminiviruses in East Africa. Most of James’ professional career has focused on strengthening understanding of cassava viruses, and using that improved understanding to develop and facilitate the promotion of control strategies.

James has published widely in peer-reviewed journals and has also contributed extensively to the development of training materials in various media formats, including video.

He has worked closely with a wide range of national and regional research institutions, as well as donor organizations, in developing research for development programs in sub-Saharan Africa. The most recent experience has been with USAID-funded programs and the Bill & Melinda Gates Foundation’s Great Lakes Cassava Initiative (GLCI).