Bean growers in Rwanda often have less than a hectare to maintain a family. An ex-post impact assessment demonstrated that adopting households reap benefits from the climbing beans introduced by the international Center for Tropical Agriculture and the project, Pan African Bean Research Alliance (PABRA) more than 20 years ago as a means to intensify bean cultivation. Approximately 4.4 million people have raised their consumption expenditure, bean consumption and food security, while 0.6% of them are lifted out from poverty. 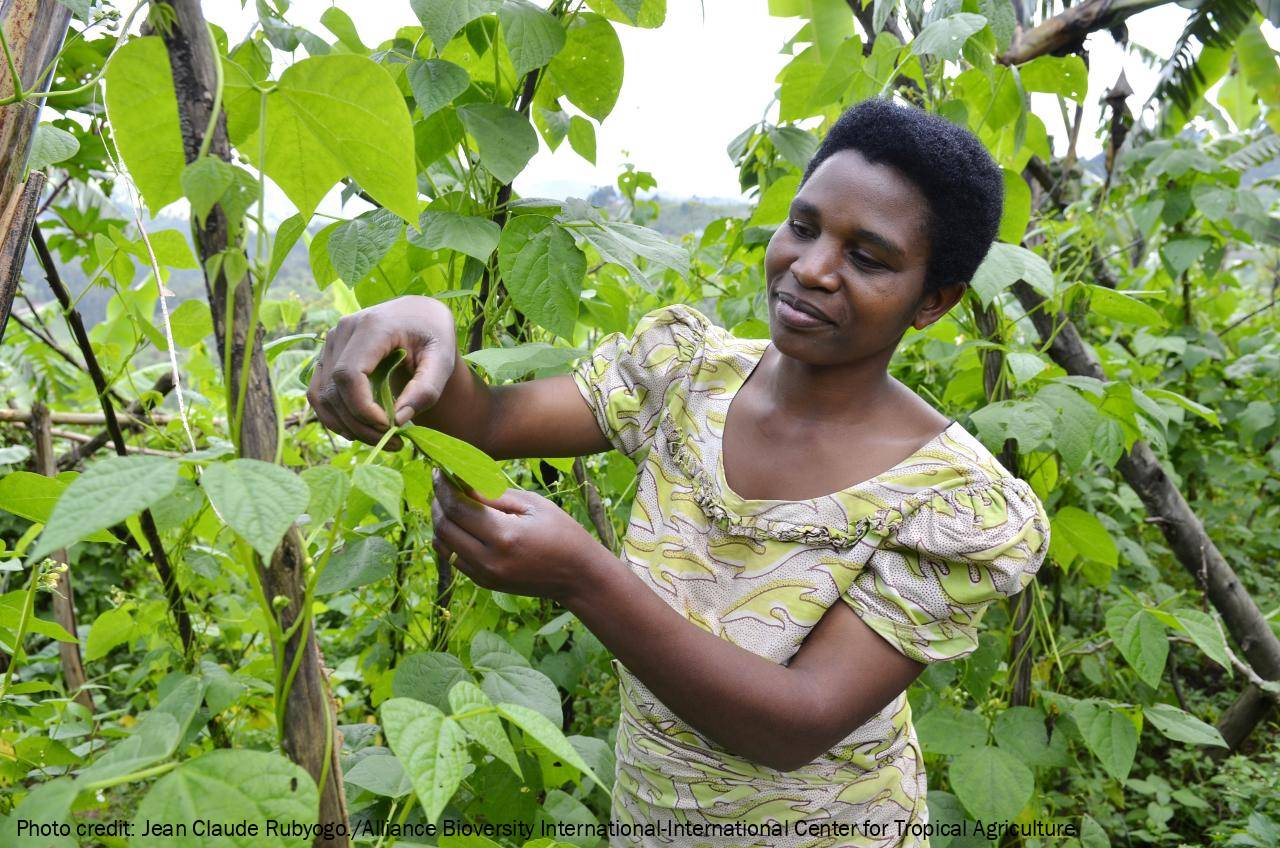 Common bean (Phaseolus vulgaris L.) is one of the important pulses grown by small-scale farming households in Sub-Saharan Africa for food security, nutrition and cash income. In Rwanda, beans are  staple food providing the average household diet with 32% of its calories and 65% of its protein (1) across the country. It provides cash income to about 31% of the households. However, a typical farming household in Rwanda often has less than a hectare of land to grow all food crops for the family. With 79-88% of bean consumed by the typical household coming from own production, Rwanda requires large improvements in land productivity to feed its rapidly growing population.

In the mid-1980s, bean productivity declined as cultivation expanded into marginal areas. This led to bean production deficits that raised policy concerns about national food security as the importation to bridge the demand gap continued to grow.  The Rwanda Agriculture Board (RAB), then Institut des Sciences Agronomiques du Rwanda (ISAR), and the International Center for Tropical Agriculture (CIAT) joined hands to intensify bean cultivation with climbing beans. Climbing beans yield 3 to 4 times compared to the bush beans. Between 1985 and 2012, over 90 bean varieties, 48 of which are climbing beans (4) and ten of which are bio-fortified were released in Rwanda.  During the same period, RAB in partnership with PABRA, complimented by the HarvestPlus developed the seed systems for improved bush and climbing beans and supported their dissemination to thousands of bean growing families directly and/or indirectly via partnerships with NGOS, farmer groups and cooperatives.

A rigorous assessment of climbing bean adoption, its farm level outcomes and impacts has been evaluated by RAB and CIAT based on a national representative survey of 1,122 bean-growing households covering 1440 bean plots (2, 3). The results shows that about 785,714 (50%) bean-producing households in Rwanda grow climbing bean, occupying 43% (235,903.8 Ha) of the national bean area (3). This is a substantial increase over the past 15 years that accelerated after introduction of farmer preferred mid altitude climbing beans among other improved varieties, (Figure 1). Researchers attribute this success to targeted breeding that was based on agro-ecological adaptation and participatory plant breeding processes that enabled expansion of climbing beans from its traditional high altitude to medium and low altitude areas.


Climbing beans have served to intensify bean cultivation on small plots of land. An impact assessment of climbing bean adoption demonstrated that each additional kilogram of climbing bean seed planted raised per capita consumption expenditure by 0.9% and bean consumption by 2.8% (1.5 kg per person per agricultural season). This translates into an additional 117,480 tons of bean consumed by 4.4 million people in the country each year. Adoption of climbing bean also increased the probability of household food security by 0.6% while decreasing the likelihood of being poor by 0.6% (2), which translates to 4,714 households lifted out of poverty per year.

The high yielding advantage of climbing bean was able to compensate for the smaller land area planted by adopters and provide benefits to families that were disadvantaged by declining land sizes and quality (2). Specifically, adopters were found to obtain an additional 270 kg/ha from climbing bean cultivation compared to the situation where they had not adopted while non-adopters would harvest 657 kg/ha more beans if they switch from bush to climbing bean cultivation. The difference in yield advantage between the two groups of farmers is because adopters were different from growers of bush beans in other ways, such as farming on marginal land that limited the yield response of climbing beans. However, those adopting climbing beans  would have been much worse off without the innovation (3).

These outcomes are ushered in collectively by CIAT, and PABRA project.

Alliance for a Green Revolution in Africa - AGRA