This study documents the release and adoption of improved potato varieties (IVs) in seven major potato producing countries in Southeast, South, and East Asia. Data on varietal release from 1952 to 2015 was considered. Of over a total of 491 IVs released, 210 (43%) are adopted and cultivated; 63 of those are CIP-related IVs. In 2015, potato cultivated area was 7.6M ha and 97% was planted to IVs. 19% (1.4M ha) of this area was planted to CIP-related IVs. 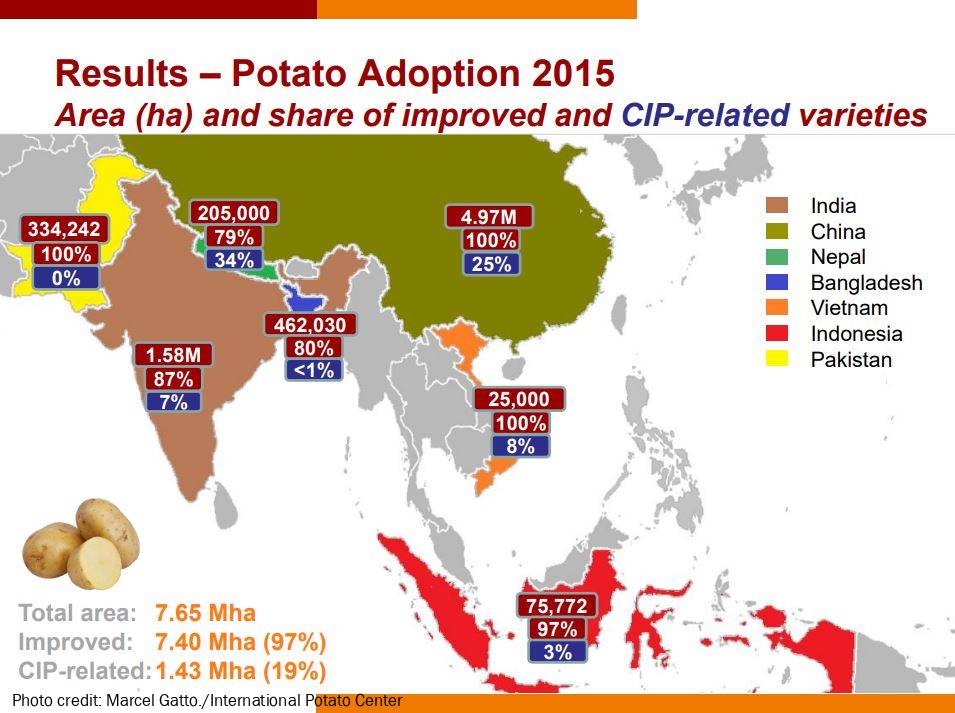 In close collaboration with NARS, international agricultural research centers have greatly contributed to the development and release of improved varieties in Southeast, East, and South Asia. During the Green Revolution (1960-2000), breeding programs strongly focused on high-yielding varieties to combat undernourishment. Thereafter, global challenges such as climate change, related biotic stresses, and the awareness of the importance of micronutrients in rural diets influenced breeding objectives that progressively included traits related with enhanced crop resilience and nutritional value.

Since the start of documenting varietal release, NARS have released a total of 491 varieties in the study region. Of those total releases about 40% have found their way onto the farmers’ fields. On average, breeding programs placed more emphasis on biotic (i.e. late blight, bacterial wilt, x-virus, y-virus, s-virus, leaf curl, and nematodes) than abiotic (i.e. drought, heat, and frost) traits.

In this study, we close the identified gaps in the existing literature and national statistics on release and adoption data of improved potato varieties by documenting the release and adoption in seven major potato producing countries in Southeast, South, and East Asia. Methodologically, this study adopts a refined expert elicitation (EE) approach applied in previous projects. An average of 15 experts working in the potato value chain participated in a one-day event to elicit perceived adoption rates and to update release databases. In total, 347 experts attended 23 workshops which were held during 2014-2016. Release and adoption of potato improved varieties was studied in Bangladesh, China, India, Indonesia, Nepal, Pakistan, and Vietnam. In 2015, the potato area in our study region was 7.6M ha. About 97% of the area was planted to improved varieties (IVs). In terms of area, CIP-related varieties were planted to about 1.4M ha which is about 19% of the total area. China accounts for most (87%) of total area cultivated to CIP-related varieties. About 3M households were using CIP-related material, particularly in China (2.5M), India (0.2M) and Nepal (0.1M).

The study documents the key traits that constituted key breeeding objectives in the past decades. In addition to high-productivity, key traits were related to climate resilience (i.e. resistance against drought, heat, and frost) and resistance against biotic stresses (i.e. late blight, bacterial wilt, x-virus, y-virus, s-virus, leaf curl, and nematodes). The study shows how climate resilience has increasingly been targeted in breeding programs and this was reflected in the number of varieties released with these traits in the decade 2004 - 2014.