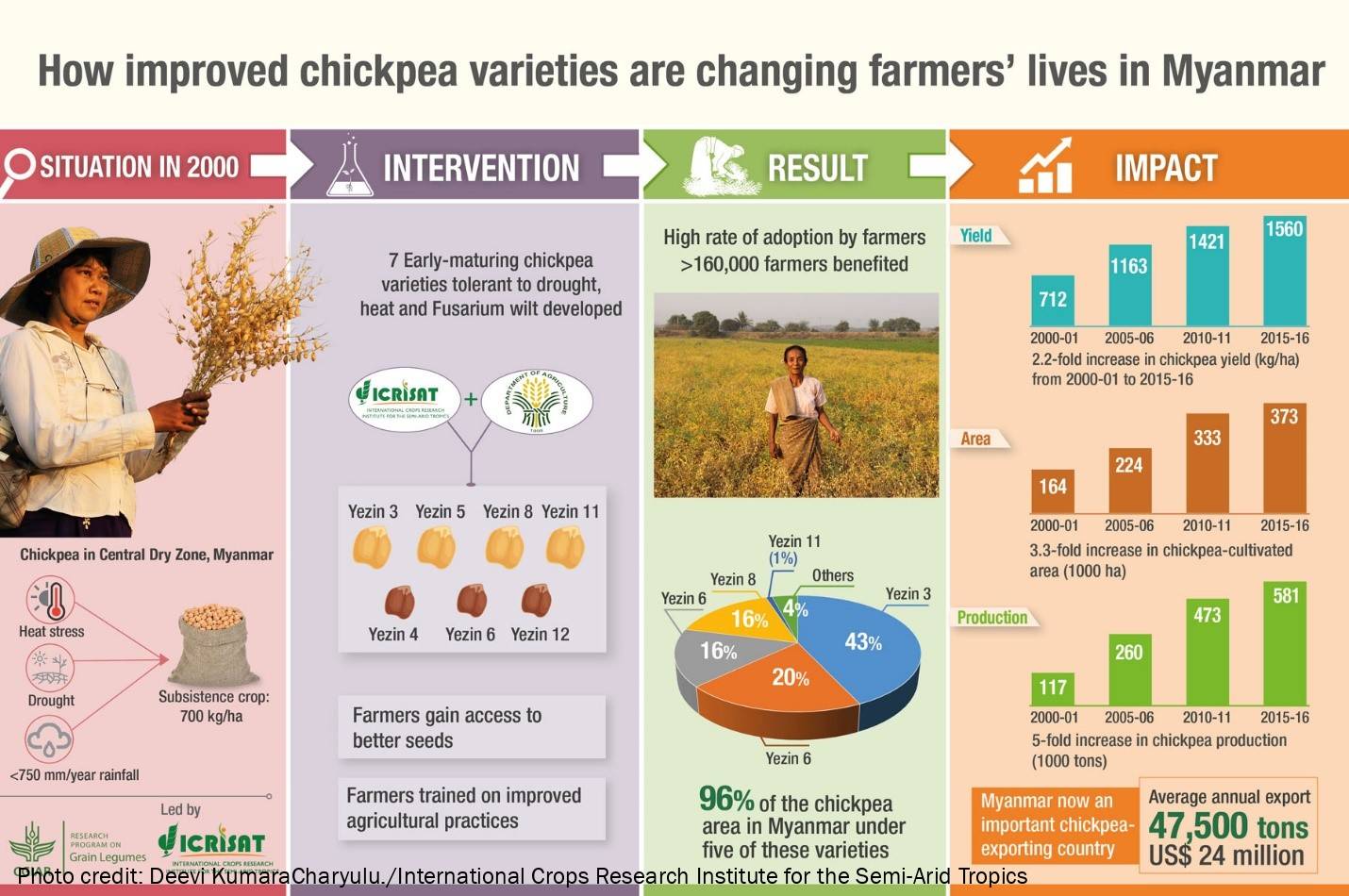 A chickpea farmer stands amidst her farm.

Chickpea (Cicer arietinum L.) is the second largest pulse crop grown in Myanmar after dry beans (FAOSTAT 2018). Chickpea, like other pulse crops traditionally grown in many parts of the world, has multiple functions in the traditional farming systems especially in many developing countries. As well as being an important source of human food and animal feed, it also helps in the management of soil fertility, particularly in drylands. Myanmar ranks second after India in terms of chickpea production in South Asia. Chickpea is currently grown on 364,000 ha with a total production of 559,000 Tons and the mean productivity level estimated at 1537 kg per ha (FAOSTAT 2018). The cropped area in the country has expanded nearly 3.3 times from 110,000 ha in 1961 to 364,000 ha by 2017. The production has increased almost 15.5 times during the same period. The crop productivity has increased nearly five times due to rapid adoption of early maturing improved cultivars. On average, the chickpea productivity in the country has increased about 18 kg per year during 1961-2017. Both cropped area expansion as well as productivity enhancement have significantly contributed to production growth during the study period.

A comprehensive quantification of the research benefits at farm level is timely, particularly in Myanmar as the outcome of the analysis will showcase the impact of improved chickpea technology in the country. A systematic tracking approach was developed using a representative sample survey conducted in Central Dryland Zone (CDZ) of Myanmar where nearly 96% of total chickpea is being cultivated. The cropped area is concentrated more in Sagaing (46%), Mandalay (26%) and Magway (23%) states. The adoption and impact survey of 403 households[1] as well as in-depth understanding from the temporal changes in area, production and yield, revealed the fast-changing patterns as a result of the key drivers of technology adoption and other sources of growth. A partial equilibrium model based on the principle of economic surplus was used to explore factors that have fostered the widespread adoption of chickpea technology throughout the region, identifying the welfare effects from farm to national level.

[1] Covering three states, six districts, 12 blocks and 41 villages of CDZ region of Myanmar representing over 96% of the chickpea area in the country.


ICRISAT’s chickpea research program at Patancheru, India has strong research collaborations with Directorate of Agricultural Research (DAR) of Myanmar. Apart from germplasm sources, more than 5000 breeding lines were supplied by ICRISAT between 1976 and 2018 for immediate use in the chickpea breeding and crop improvement. The major objectives of chickpea breeding include improvement in yield potential, resistance to root diseases (mainly Fusarium wilt, collar rot and dry root rot) and pod borer; tolerance to terminal drought and heat stresses; and market-preferred seed traits. Development of early maturing varieties is important focus as chickpea is grown in post-rainy season on residual soil moisture without irrigation, and hence terminal drought and heat stresses are the major constraints to chickpea production.