Farmers in East Africa are adopting practices to control BXW. The results of the first nationally relevant study on the adoption of BXW control practices in Uganda was published and provides information about numbers of adopters, practices adopted and estimates of benefits linked with adoption. 600,000 is the number of households that have adopted at least some of the BXW control practices. Adoption of these practices is higher on subsistence farmers. Productivity and economic benefits are higher on larger farms. 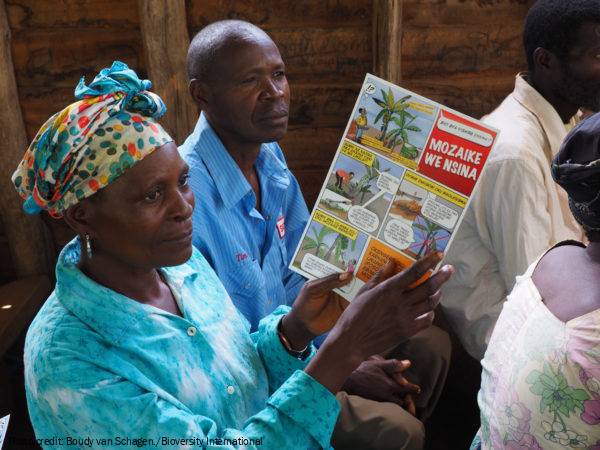 A woman reads a flyer as part of efforts to increase the uptake of the SDSR technique.

Enoch Kikulwe (Bioversity) and colleagues conducted a large, quantitative survey of 1,224 farmers in Uganda to estimate the adoption of control methods for banana Xanthomonas wilt (BXW). The study found that farmers are widely adopting technologies that came from RTB research to manage this incurable disease.

The study used advanced statistics to estimate adoption for three BXW control methods: a) removing the male flower bud that attracts the bees and other insects that vector the bacteria, b) cutting down diseased plants and mats, and c) disinfecting metal tools with fire or a sodium hypochlorite solution.

Extent of adoption: 70% of adopters adopted cutting of single diseased stems, either alone or in combination.

Limitations: Knowledge boosts the adoption of control measures, especially if bananas are an important crop to the household. 55% of the sample farmers received training on BXW control, but 69% of farmers who adopted the whole BXW control package received training. Training women farmers increased the likelihood that the household would adopt all three control methods by nine percentage points.

A third of the farmers (33%) produced bananas at the subsistence level, and they were more likely to adopt all of the control practices, either because bananas are crucial for their  livelihoods, or because the practices are easier to adopt on smaller areas. Access to off-farm work decreases the likelihood of adopting BXW control practices, suggesting that the more time one has, the easier it is to adopt the control techniques.

A solid understanding of the technologies helps farmers to benefit more, even among farmers who adopted the whole package. Farmers trained in BXW obtained an average of 176% more value when they adopt all three practices, while untrained adopters of all three practices earned only 113% more. Extrapolating the results of the survey, about 600,000 of Uganda’s 800,000 banana growing households have adopted some of the BXW control strategies.

Banana Xanthomonas wilt (BXW) threatens crucial banana and plantain crops in East Africa. Research by Wageningen University and Bioversity in 13 villages in DR Congo show that bananas had been the most important crop before BXW struck. Now only one village ranks bananas as their top crop, and farmers are replacing bananas and plantains with other crops. Due to the importance of BXW, it is crucial to understand how farmers are adopting techniques to control it. Bioversity conducted a large, quantitative survey of 1,224 farmers in Uganda (1).

The study used advanced statistical methods to estimate adoption and the underlying contributory variables for three new BXW control methods: a) removing the male flower bud that attracts the bees and other insects that vector the bacteria, b) cutting down diseased plants and mats, and c) disinfecting metal tools with fire or a sodium hypochlorite solution to keep from spreading the disease to healthy plants.

The study found that adoption is constrained by the lack of knowledge of control measures and influenced by the importance of the banana crop to the household. Training women farmers increased the likelihood that the household would adopt all three control methods. “Higher adoption by subsistence farmers could be due to the centrality of their crop to their livelihoods, or the relative ease of adopting the practices on their smaller acreage,” says Enoch Kikulwe.

Adopting all three control practices was more profitable than using one or two. Non-adopters earned the least from their banana production, as adopting BXW control measures reduced the disease incidence and increased banana yields and sales. Farmers who received training from extension benefited more by adopting than adopters who had not trained.

Uganda has an estimated 800,000 banana-growing households. Extrapolating the results of the survey 600,000 households have adopted some of the BXW control strategies.

Another study found that men do most of the work with the banana crop and they handle the sales, while women manage plantains grown to eat at home. Men are also more likely to attend trainings on bananas. Increasing women’s access to BXW management would increase adoption and benefits (2).

The AMASHIGA project (Burundi) has also been working with farmer learning groups to manage BXW by single diseased stem removal (3). In one year, the incidence of BXW in the sites declined from 15% to less than 1%. Bioversity is now scaling out this technique.

This research was undertaken as part of the CGIAR Research Program on Roots, Tubers and Bananas (RTB).